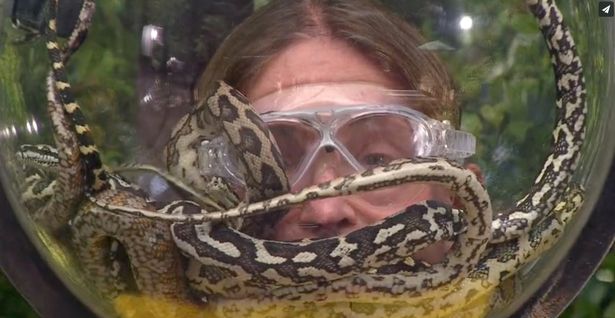 What a treat Tuesday night’s episode was!

It started on a positive note with Caitlyn Jenner awaking a sleepy Snake Rock, announcing, “Good morning Jungle, another day to excel, to test ourselves, it’ll be great.”

It was certainly a contrast to the previous morning when she had already questioned whether she wanted to remain in the process.

And ‘great’ it was as the five remaining contestants at Snake Rock all took part in the ‘Face Your Fears’ Bushtucker Trial.

Jenner, Ian Wright, Andrew Maxwell, Jacqueline Jossa and James Haskell each had their head and hands placed in separate containers – meaning that they could not brush any critters away from their face – filled with their designated animals, as voted for by the public.

Simultaneously, they had to unscrew two stars in two minutes to win two meals for camp.

Maxwell proved particularly hilarious; submerged in a sea of cockroaches, the Irish comedian’s noises sounded as though he was giving birth!

Like Wright and Haskell, who faced scorpions and rats respectively, he could only manage to unscrew one star.

Jossa, meanwhile, fought back the tears to admirably win two stars despite facing her biggest fear: spiders. Jenna conquered snakes to do likewise, putting the men to shame.

It gave them a total of seven meals to take with them as they finally entered the Main Camp, where things hadn’t looked quite as positive.

We saw the first minor tiff of this year’s series occur when Roman Kemp understandably dubbed Adele Roberts as “random” for choosing to bring a photo of Loose Women panellist Jane McDonald as her luxury item.

Roberts became defensive over it, calling Kemp “prejudiced,” before they kissed and made up.

Unfortunately this did not dissuade viewers from voting for both of them to face the next Bushtucker Trial, which is named ‘Just Desserts’ and will be this year’s first eating challenge.

At 7/2, Kemp isn’t far from favourite to face the same fate on tonight’s show. But Jenner is once again favourite at 3/1 to be voted for the next trial, ahead of Jossa at 10/3 and Wright, also 7/2.

Unfortunately, the bookmakers seem confident we won’t be hearing Maxwell’s hilarious groans in the immediate future, as he is priced a long way back at the bottom of the pile at 28/1.