We analyzed each and every minute of football played in the top five European leagues, from 2016 to 2021, to understand the representation of domestic and international players. 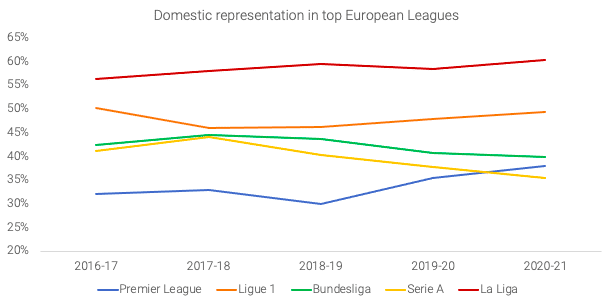 As we see from the graph, La Liga leads the way when it comes to representation of domestic players.

The Spanish league is followed by Ligue 1. French players played 50.2% of all playing time.

The case for Serie A is similar to that of the Bundesliga.

Over the years, the Premier League has been blamed for neglecting domestic talent in favour of international stars.

However, the Premier League is arguably the only league which has witnessed a significant increase in the playing time of domestic talent in the last couple of seasons. 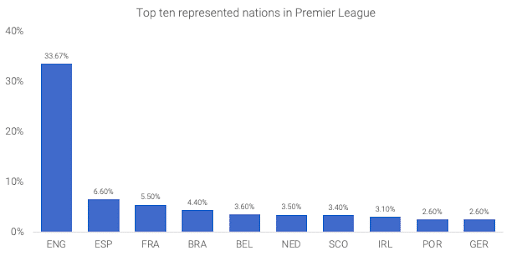 When we look at the collective data from the last five seasons, the Premier League stands last in terms of domestic representation.

It is interesting to note that only one out of the top ten nations is not in Europe – Brazil. 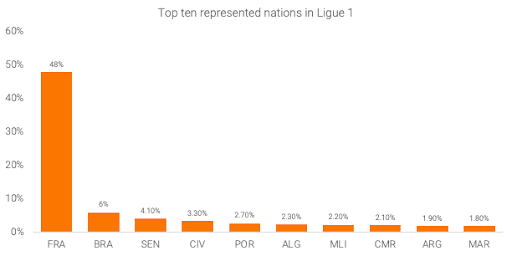 Over the last seasons, French players accounted for 48% of all playing time. A look at the graph also shows that Ligue 1 is the preferred destination for players from Africa.

Six out of the remaining nine nations are African: Senegal, Ivory Coast, Algeria, Mali, Cameroon and Morocco; Two are South American: Brazil and Argentina; and only one is European: Portugal. 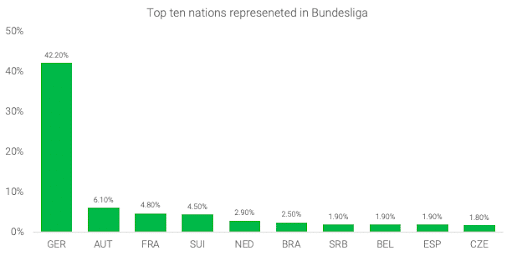 Bundesliga lies in the middle with German players accounting for 42.20% of playing time during the last five seasons.

The German league is a favoured destination for footballers from Austria and Switzerland.

In Serie A, Italian players played 39.80% of playing time during the last five seasons.

It is also evident from the graph that Serie A is popular among South American nations. Argentina and Brazil complete the top three, and Uruguay is in tenth place. The remaining spots are occupied by European nations. 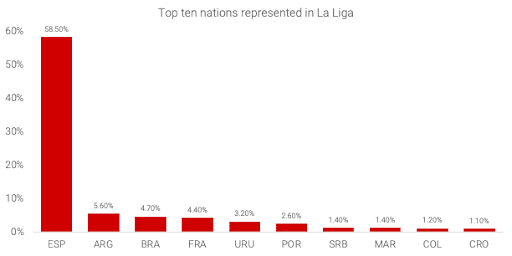 La Liga leads the way when it comes to domestic representation. Since 2016-17, Spanish players have played 58.50% of all football in La Liga.

Similar to Serie A, La Liga is popular among South American players with four nations figuring in the list.

It is also worth mentioning that only two nations make all five lists: Brazil and France. Meanwhile, England is the only major footballing nation that features in only one. 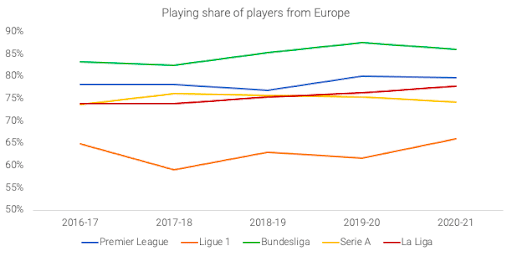 It is clear to see that Bundesliga is the most Europe-centric league among the top football leagues. In the German top tier, the representation of European players ranged between 82.5% and 87.6%.

On the opposite spectrum, Ligue 1 is the least European league among the top leagues. In the French league, the European representation ranged between 59% and 65.9%.

The Premier League, ranging between 76.8% and 80%, ranks slightly above La Liga and Serie A. In La Liga, the representation has increased from 73.8% to 77.8% in the last four years. 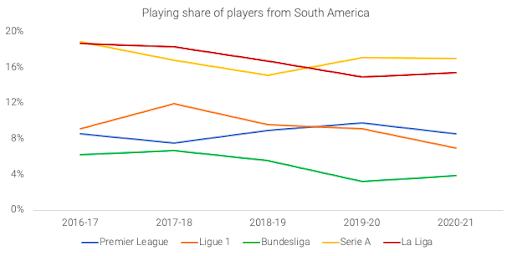 Ligue 1 and Premier League are in the middle, with the English league offering 8.6% of its playing time to South American players and Ligue 1 at 7%.

Bundesliga is clearly at the bottom. South American players made up only 3.9% of playing time in 2020-21. 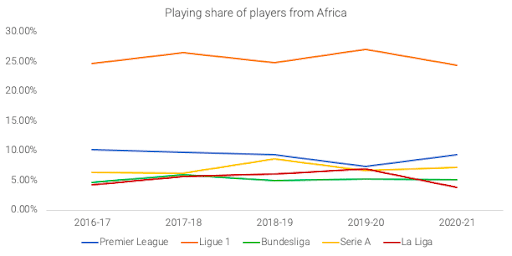 The most important observation from this graph is Ligue 1’s clear domination over other leagues when it comes to finding African talent.

Players from the African continent account for a quarter of all playing time in the French top tier. Their representation ranged between 24.4% to 27% during the last five seasons.

The Premier League is far second in this comparison. Last season, players from African nations contributed 9.3% of playing time in the English league.

The remaining three leagues register figures around the 5% mark, with Serie A holding a slight edge over the other two. 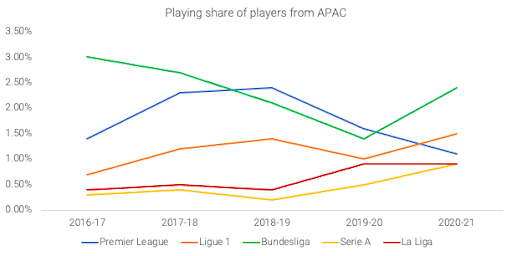 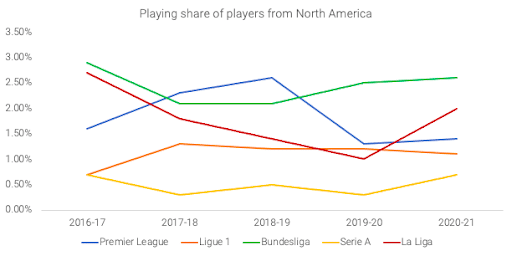 Representation from Asia-Pacific and North America is quite low in all the leagues. There appears to be no visible trend in both graphs.

We can say that La Liga is clearly the leader when it comes to providing opportunities to domesticated players.

This can be considered a good sign for the future of the England national team. However, England is also the only major footballing nation that doesn’t have a decent representation in any other major league.

Bundesliga is the most Europe-centric league while Ligue 1 is a popular league among African footballers. Both Serie A and La Liga lead the way for South American talent.